When Dr. Howard Oliver is not busy with his career in Forensic Pathology or his personal interests in studying the Civil War, his greatest passion is traveling.

Tokyo, Japan is the world’s most populated metropolitan area at 37.8 million people; 13.6 million in the city itself. As the capital city, it is the home of the Japanese Imperial Family, the Japanese government, and one of the world’s biggest financial hubs along with New York City and London. The internationalization of Japan after World War II has made Tokyo a sprawling landmark city, mixing modernity with tradition, and attracting millions of tourists every year. An average of 20 million tourists come into Japan every year to visit Tokyo and the rest of the country, ranking them among the Top 10 places visited in the world.

Dr. Howard Oliver loves traveling to Tokyo. Throughout his travels he has learned a great deal about the beautiful city which he has summarized below to help fellow travelers better understand the people, history, and culture. 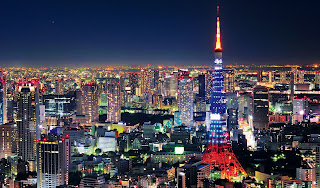 
Tokyo (“Eastern Capital”) was previously called Edo (“Estuary”) and was a small fishing village until 1868, when Emperor Meiji made it the new imperial capital, and thus changed its name. The city began to build in its high-density form in the 1900s so its railways would be the center to take people in and out of places – hence the city being very unfriendly to cars. After being bombed out in World War II, the city was completely rebuilt with high-rises and an extensive subway and commuter rail that brought back in millions of people. Because of the country’s danger to earthquakes, the infrastructure is resistant enough to minimalize damage. Tokyo hosted the 1964 Summer Olympic games and will host the next Summer Olympics in 2020.


The city is extended from the bay 56 miles inland and comprises of 23 special wards, 26 cities (a city within a city), 5 towns, and 8 villages. This comes from the merger of Tokyo City with Tokyo Prefecture in 1943, creating the “metropolitan prefecture.” In addition, the metropolis is extended in the Pacific Ocean’s two island chains off the coast, the Izu and Ogasawara Islands, which go as far as 1,150 miles from the mainland. Tokyo’s climate is humid and subtropical, averaging from mid-40s in the winter to high-70s in the summer.


Shibuya – You may have recognized this district for all the people crossing the street surrounded by colorful ads on buildings. It is the most well-known district in the city and just standing in the center of it all is a great visit.


Meiji Shrine – It is one of the most popular temples in the country with its combination of traditional architecture and nature. Weddings take place here within the heart of the city.


Sensō-ji Temple - In the Asakusa district stands a shrine to Kannon, the Buddhist goddess of compassion, which was built in 645 with the Kaminari-mon Gate’s red paper lantern with the inscription "Thunder Gate" in Japanese.


The Imperial Palace - With its beautiful 17th-century parks and the Nijubashi Bridge leading inside that goes over the moat, it is still in use by the Imperial family. It is also a place where you could see the Emperor if you are around on January 2 or April 29, where he and his family do go out to the main Palace Gardens.


Ginza – Tokyo’s busiest shopping area has major shops and massive megastores with many tea/coffee shops and restaurants that are some favorites for Dr. Howard Oliver. So, if you are a shopper-holic and want to spend half a day browsing and wanting to buy stuff, here’s one place to have on your radar.


The National Museum of Tokyo - Opened in 1938, it houses more than 100,000 works of Japanese, Chinese, and Indian art, as well as a collection of old textiles, historical weapons, calligraphy, and military equipment dating back to the 6th century.


The National Museum of Nature and Science – Opened in 1871, it has a large collection of artifacts with natural history and science, as well as interactive displays on Japanese space development, nuclear energy, and transportation. As a history buff, Dr. Howard Oliver is particularly fascinated by these museums.


Tokyo Skytree – Something modern, indeed, as it opened in 2012 and became a smash with its panoramic views from the top, a glass spiral walkway with glass floors (don’t look down if you can’t handle it), and its restaurant inside.


In addition there are dozens of sightseeing services in nearly all languages, both on foot and by bus. Plus, Japan’s famous tea ceremony can be experienced at Shinjuku Gyoen National Park, oceanfront Tokyo can be seen by taking an unmanned train to Odaiba-kaihin Park, and the politically interested can visit the Diet Building.


There are many hotels with all the room for you to relax in. Here are some to consider that Dr. Howard Oliver has experienced throughout his travels:

To learn about other travel experiences from Dr. Howard Oliver check out his Scoop.it profile: http://www.scoop.it/u/dr-howard-oliver.