Determining the Cause of Death in an Autopsy 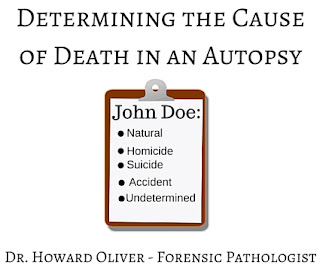 A forensic pathologist’s main mission during an autopsy is determining the cause of death of the individual. From a legal perspective, law enforcers need to be able to prove beyond reasonable doubt that the cause of death was due to reasons or circumstances deemed unnatural.
Any sudden or unexpected death of an individual in today's times is looked at through an autopsy in order to completely rule out foul play and simply to gain a better understanding of the exact cause of death.

As an expert forensic pathologist with a total of over 30+ years of extensive educational and professional experience, Dr. Howard Oliver holds in depth knowledge in conducting a proper autopsy and determining the cause of an individual's death. Below, Dr. Howard Oliver discusses the different steps and processes a forensic pathologist must go through in order to determine the cause of death of an individual.

Aspects to contemplate on
To determine the actual cause of death, several aspects need to be taken into account by the pathologist. First of all it need to be ascertained whether the deceased was found at a place that he or she should not have normally been. Did the person have any visible injury or was he or she in any condition of undress? If indeed there were injuries, what could have caused those injuries? Could it have been a weapon? If so what kind of weapon?
These type of questions are very pertinent and answers need to be found quickly and satisfactorily. In some cases of death an inquest is essential to find out how an individual died- whether natural, accidental or by misadventure- and a pathologist’s expert opinion is sought to prove the actual cause of death beyond an iota of doubt.
Difficult chores
However, even the pathologist may find it extremely difficult to prove how exactly it occurred, in the absence of visible signs or a case of ill health of the deceased. He would have to rely on deeper examination and indeed his diagnostic instincts.
When death occurs suddenly and without warning, statements of close relatives are essential. Also, medical records, and other sundry reports are required to be considered. All these would help the pathologist to create a detailed sketch of the deceased person’s life and lifestyle. Especially so, if the deceased was in some kind of duress that could have led to possible cardiac arrest.
In spite of all this, a forensic pathologist can arrive at a concrete conclusion regarding the cause of death only subsequent to a thorough autopsy. This is because an autopsy can provide substantial proof of what caused death and how exactly it could have happened. If it was a case of murder, the weapon used could be determined. For example, if the victim was stabbed with a sharp weapon the type of weapon as well as the characteristics of the attacker- if he was well built or not, whether he was right handed or a southpaw- could be determined through profiling.
Similarly, it would be easy to guess if the victim had tried to defend himself or was simply overwhelmed by the attacker. All this information would eventually help in recreating the sequence of events as had happened.

Concrete conclusion
So too if death occurred due to natural causes or even accident, homicide or suicide. An autopsy would remove all doubts, as the pathologist would be able to arrive at a definitive conclusion. Along with the cause of death, an autopsy would even help to estimate the approximate time of death.
Determining the cause and time of death would go a long way in helping with a criminal inquiry or investigation. It would definitively provide valuable evidences of events that led to the death of the victim.

To learn more about Forensic Pathology and determining the cause of death in an autopsy, check out the TV Appearances Dr. Howard Oliver has made throughout his career, dealing with major events and well known individuals.